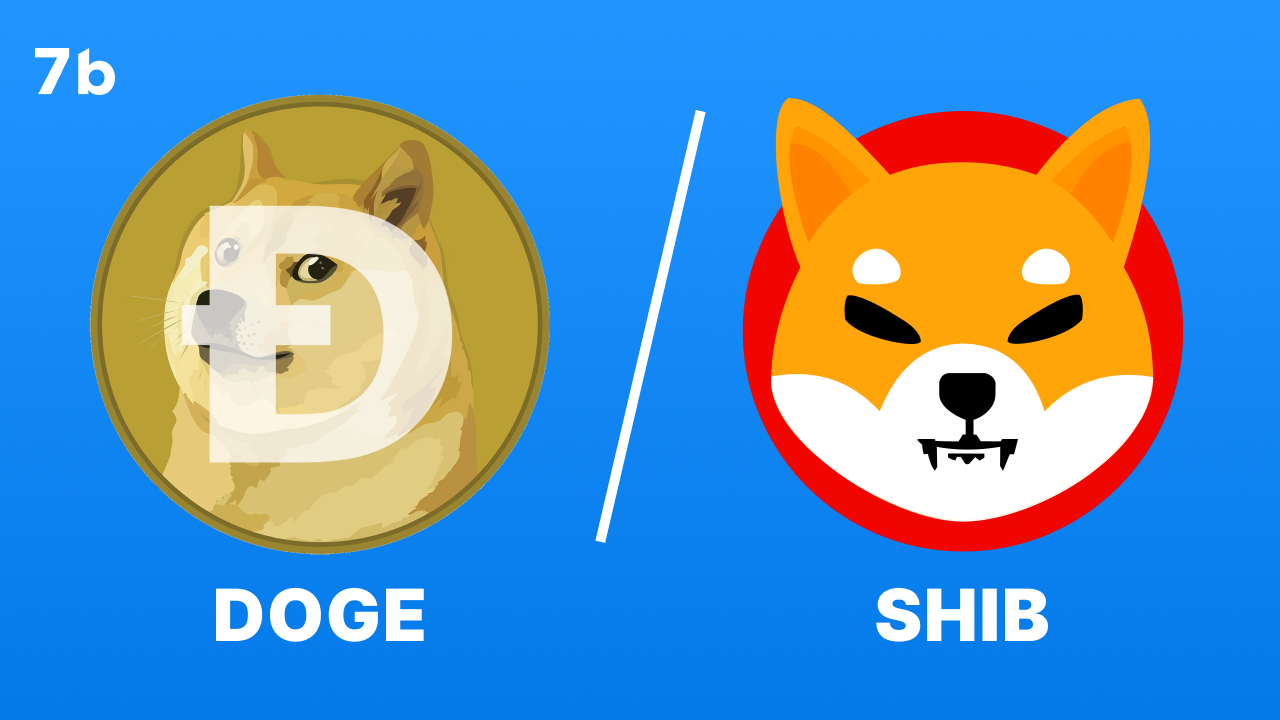 According to the quarterly report of CoinGecko, during this period, the cryptocurrency showed a colossal yield of 11,566,501%. Despite the fact that SHIB is not included in the top 5 cryptocurrencies, at the end of the quarter it surpassed DOGE. This article compares the various value propositions presented by the Shiba Inu coin (SHIB) and Dogecoin (DOGE). We explain the key features of two cryptocurrencies, their history, idea, and their investment potentials in the future.

Dogecoin is a decentralized network for performing payment transactions, with open source code. It is the result of a fork of Litecoin. DOGE functions based on the Scrypt technology. It has unlimited emission, and fast transaction processing speed (it takes only a minute to add a block).

As of July 2021, the coin is in the top 10 by market capitalization ($21,604,889,877), and the cost of one DOGE is $0.1654. DOGE is one of the best cryptocurrencies for mining. Its active and dedicated community widely uses coins for conducting financial transactions and also uses DOGE to raise funds for charitable purposes.

What is Shiba Inu?

Shiba Inu is a decentralized ecosystem based on the Ethereum blockchain that is completely controlled by its community. The main functions are the exchange of digital assets, the NFT marketplace, and passive income tools. SHIB is an ERC-20 standard token with a limited issue of 1 quadrillion.

In July 2021, value of SHIB is $0.000005801, with a market capitalization of $2,286,443,703. According to the creators, they deliberately set a low cost, so that everyone could buy millions of coins, and earn a fabulous profit on a seemingly insignificant price increase.

The team is trying to create an ecosystem consisting of several coins (LEASH, SHIB, and BONE), a decentralized exchange (DEX) known as ShibaSwap, and a dynamic community.

Differences between Shiba Inu and Dogecoin

Although both coins have similar characteristics: they use Shiba Inu as their mascot, are decentralized, are actively used in community circles, and also participate in charity fundraising events. Still, they have different basic characteristics, which are important to examine:

So we see that although SHIB and DOGE are direct competitors, they are essentially completely different. It should be noted that Dogecoin is a fork of Litecoin. While SHIB operates on the basis of the Ethereum blockchain. In addition, the limited issue played into the SHIB’s hands, and the fact that the project is switching from PoW to PoS consensus is well accepted by many investors. However, Dogecoin has existed since 2013 and over the years has managed to earn a good reputation and enter the top best cryptocurrencies. The reason for such a stunning success of Dogecoin is often called the fact that such a global influencer as Elon Musk actively supports the project in his Twitter. After a series of tweets that DOGE is his favorite as well as the people’s cryptocurrency, the asset’s quotes soared to the skies.

At the same time, SHIB also has a kind of patron in the form of the well-known Vitaly Butyrin. The SHIB team sent about 40% of its assets to Buterin. He, in turn, refused such a gesture and burned 90% of coins, sending another 10% to charity. Thus, the attention to the currency was extremely high. Since a considerable part of the tokens is burned, and the issue of SHIB is limited, this had a favorable effect on the price of the asset.

Where to buy Dogecoin and Shiba Inu?

On July 6, 2021, the decentralized exchange platform Shiba Swap was launched. The platform offers users to exchange tokens, as well as to deposit SHIB on stacking. The website presents various ways in which Shiba Inu holders can receive rewards for placing their SHIB coins on the platform. This was followed by the release of two new tokens: LEASH and BONE. These tokens were not available for purchase before the launch of ShibaSwap DEX.

Both SHIB and DOGE cryptocurrencies have high liquidity and are traded on most large and reliable crypto exchanges. The best exchanges for buying or selling these coins according to CoinMarketCap are:

Always remember that investing in any cryptocurrency is an extremely risky venture. And such meme-currencies, which are supported only by hype, can both make you rich and ruin you. So be extremely careful in your calculations and investments, and do not invest more than you can afford to lose.

Since the launch of Dogecoin in 2013, the process of creating cryptocurrencies has become noticeably easier, and therefore new meme tokens could be created every day and become known if they were somehow connected with current events or major influencers. So, in addition to SHIB and DOGE, there is already a whole family of dogs on the crypto market:

All these cryptocurrencies do not carry a fundamental novelty, but are simply used in narrow circles and are hyped at the expense of the progenitor.

There is no clear leader in this battle. Both coins use a Shiba Inu meme, both are hyped, both are used for charitable purposes. DOGE is supported by such world celebrities as Elon Musk and Mark Cuban. At the same time, this also affects Shiba quotes. The advantages of the latter are the limited issue and their DEX, in which tokens serve as a bridge.

DOGE has been trading on the market since 2013 and has already managed to gain the trust and recognition of the community and celebrities. At the same time, SHIB quotes have increased significantly over the year, largely due to hype and confusion on Elon Musk’s Twitter. It is not necessary to exclude the possibility of a Shiba victory, but still the project is too young and has not yet fully recommended itself.

What is Doge and Shiba?

Doge is some progenitor of the meme cryptocurrencies. And SHIBA is probably the most successful project of the followers. Despite the similar concept, use cases, and idea, they have different basic characteristics and function on the basis of different blockchains.

The one dollar goal is extremely cloud-based for the SHIBA project. There is a better chance of achieving it if most of the tokens are burned. However, if the growth continues at this pace, then by the end of 2021 SHIBA could reach such a mark. Still, according to Market Realist, quotes will be able to reach $1 by 2025, provided that the price will grow by 20% per month.

Is it worth buying Shiba Inu coins?

Yes, SHIB is a profitable long-term investment, given the growth indicators over the past year. If the project adheres to its strategy, the potential growth for the year will be +102.32%. In addition, SHIB coins are very cheap, so you can safely invest some of your free funds in their purchases and earn money on increasing the price.

What does Doge stand for?

First of all, the Dogecoin project was created for ordinary people. It was planned that it would be really useful to everyone and, most importantly, affordable at its price. DOGE is currently used in many industries. Its main purpose is to conduct various charitable collections. Also, this coin can be used by users to transfer their funds on P2P basis, exchange for other cryptocurrencies (or for withdrawal to fiat money), purchase goods on the Internet, pay for services, etc.

Where can I find the best exchange rate for SHIB?

To compare rates and to buy crypto Doge and Shib with debit or credit card use fiatom.io

When investing in SHIB or DOGE, it should be remembered that their value is not based on any fundamental principles, but on the mood of the crypto market and attention from world famous personalities. For example, on July 9, 2021, in just two hours, DOGE quotes increased by 14%, after a tweet by Elon Musk, where he expressed his opinion about the advantages (fast transaction speed and low fees) of his favorite cryptocurrency over such giants as Bitcoin and Ethereum. But as can be seen from the history of the price rate, SHIB is also not far behind. The cost is increasing quite steadily. And with the launch of its decentralized exchange (ShibaSwap), the project has a chance to refresh its all time high.

To date, it may seem that investing in DOGE entails less risk of losing your funds, since it is more widely accepted and reliable. But at the same time, SHIB quotes are growing rapidly and the coin is extremely cheap, so there is more room for maneuver.